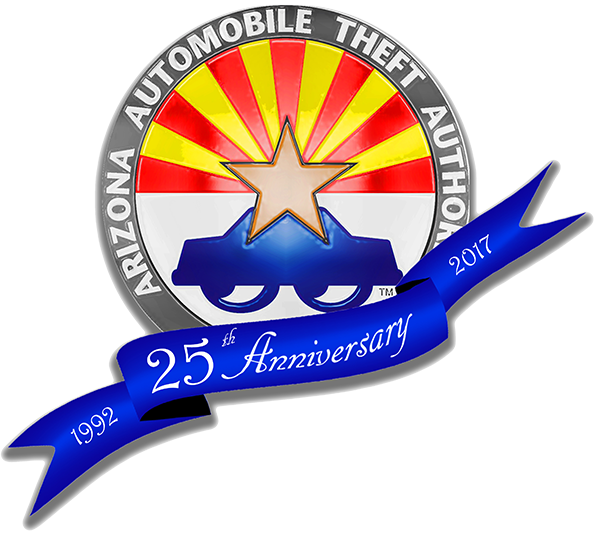 Although auto theft rates have been down, this year’s preliminary FBI UCR data reflects a 6.6% increase in vehicle theft across the nation.  Not only are the numbers of thefts increasing, but carjackings, police pursuits and reckless driving are also becoming more prevalent, putting the public at risk.
For 2016, the 10 MSAs with the highest vehicle theft rates were:

As the Arizona Automobile Theft Authority (AATA) celebrates its 25th Anniversary this year, (1992-2017) the agency vows to continue its fight against auto theft crimes in the state, with the support of our law enforcement, prosecution & community partners.

Vehicle owners can also take steps to help harden their vehicle defenses to make it an undesirable target for thieves. Criminals do not like to spend a lot of time stealing a vehicle and will move on to a softer target to steal if there are barriers.  Some recommended steps to harden your vehicle defenses are:

•           Holiday shopping? Lock gifts and all valuables in the trunk or hidden from

serve as hiding places for thieves or carjackers.

•           Be aware of your surroundings and report suspicious behavior. If you see

About the Arizona Automobile Theft Authority (AATA): The State agency, funded through semi-annual assessments of over 400 insurance companies, functions as the lead organization in a statewide network of law enforcement, criminal justice and public awareness partners working together to combat auto theft crimes across Arizona. By focusing resources in these areas, the AATA and its statewide law enforcement partners are impacting the state’s declining auto theft rate. To learn more visit www.azwatchyourcar.com.